UPDATE: With the recent release of JW6.9 (30th June 2014) the JW Team have fully integrated the YouTube iFrame API into the player. As a result jwTube should not be used with JW6.9+ as the two don’t play well together!

With the recent update of Apple’s iOS to version 7, JW Player implementations that use YouTube as a media format have started to experience issues. 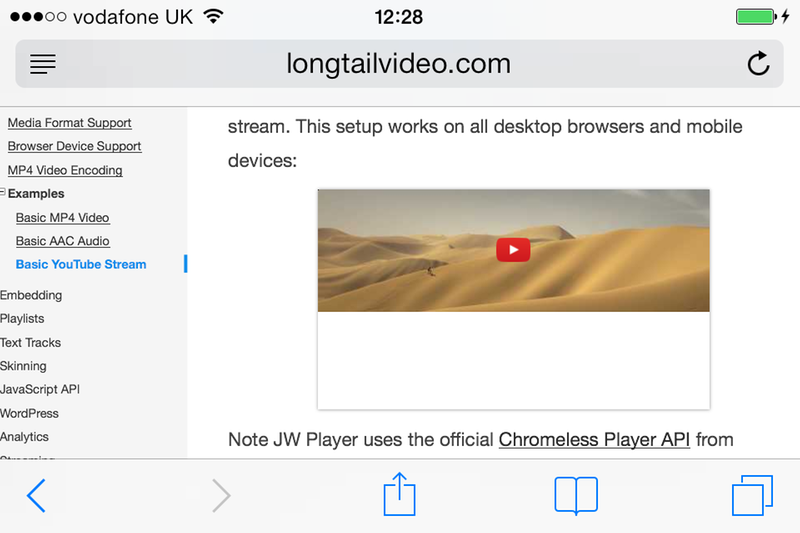 The main problem is that YouTube videos appear to halve in height – even though the JW Player container remains the correct height.

The JW Player team have acknowledged this to be an issue, and have stated that it will be addressed in JW 6.8 – which is not likely to be available until early 2014.

UPDATE: This has now been resolved in JW6.8 (released 6th Feb 2014), however JW playlists and event hookup in HTML5 mode are still missing.

In order to fill the void between now and then, I have developed a “patch” to resolve this issue.

Whilst I was at it, I also decided to address a few other JW Player 6 + YouTube + HTML5 mode annoyances, such as:

The basic implementation is very simple:

You can get the jwTube patch here.

2) Load the patch after JW player

Include a link to the jwTube patch in your page <HEAD> after the jwplayer.js library, for example:

If you are using jwTube version 1.4 or greater, then that’s it – there is no longer any additional configuration required. jwTube will make use of your existing configuration parameters to build mixed/merged playlists, and will automatically select the relevant mode for your device/platform.

Examples of using jwTube v1.4 can be found here.

If you are using versions earlier than v1.4 then some additional configuration is required in order to apply the jwTube patch:

Once the JW Player has been patched, you can hook into the YouTube “play”, “pause” and “buffer” events using the following approach:

In order to get jwTube working with the JW Player WordPress Plugin, I’ve had to create an alternative patch file.

This needs to be loaded into the HTML Head of your WordPress template.

You can get the jwTube for WordPress patch here.

Additionally, you need to include the following tag as part of the JW Plugin shortcode:

results in the following:

NOTE: I have restricted this to only modify the JW Plugin behavior on iOS7.

A visual configuration tool which allows you to build complex video configurations, with common behaviours and actions, using an intuitive drag-n-drop interface.

Build your configuration once and easily switch the player solution between JW Player 6, JW Player 7, Flowplayer 6 and Bitdash.

Streamy is a wrapper for JW Player which provides a more elegant stream detection and messaging solution for live streams.

The aim of Key Drive for JW Player is to provide full keyboard navigation and control of JW Player media in a bid to make online video/audio more accessible.